A treasure awaits to be added to your Netflix queue.

Turbo Kid joined the lineup for the digital entertainment streaming service earlier this month and begs to be watched at your earliest convenience.

It is a highly enjoyable love letter to the best elements of 1980's dystopian sci-fi flicks that is grounded with the simplistic charm of a classic coming-of-age John Hughes teen movie.

In other words, it is a glorious example of raw independent film making at its finest, according to this 100% spoiler-free review. 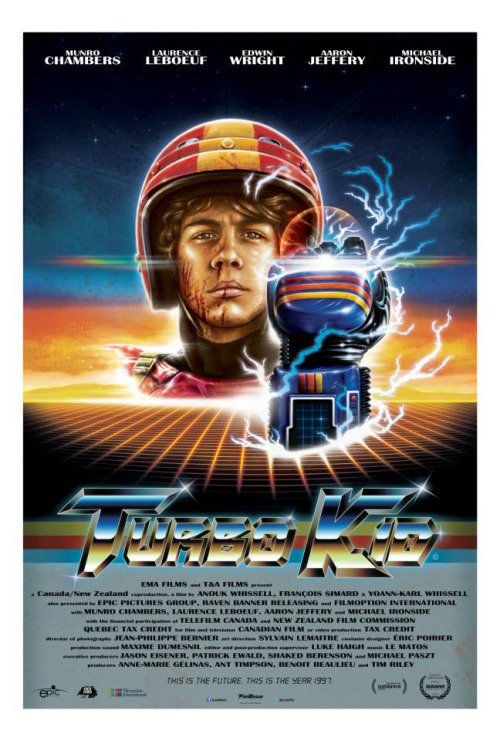 "Being a geek is very liberating, because it means you are very passionate about something and you did it as much as you want. We are huge geeks and I am proud of my geekness."[1]

This is the proud quote from Francois Simard, one of the 3 French-Canadian film makers who brought this project to life. Joined by his significant other of over 15 years, Anouk Whissell and her brother, Yoann-Karl; they are The Roadkill Superstars.

T is For Turbo was the initial short film by this power trio that paved the way for their first full-length feature film, Turbo Kid. Being less than 6 minutes long, this brief 80's post-apocalyptic adventure with elements of schlock horror can be viewed in its entirety below.

The relative success of this short film at the Drafthouse Films' ABC's of Death Competition is what sent the creators to achieve even greater accolades for their first feature-length flick at both the Sundance and SXSW (South by SouthWest) film festivals. Longer-form storytelling dictated that The Roadkill Superstars go beyond their own open fancying of on-screen cartoonish gruesomeness and add heart in the form of a touching teenage love tale during the production of Turbo Kid. This decision paid off. B. Good Enough for Repeat Viewing? (Yes/No): Yes (Netflix makes this so easy)

C. Explain Yourself, Blogger!:
The post-apocalyptic movie genre is ancient by Hollywood standards. For the past few decades, there have been way too many movies, TV shows and video games that fall under this category. The first mainstream blockbuster franchise would be that of Planet of the Ape's, followed by Mad Max's. Terminator and The Walking Dead are two more beloved examples with large fanbases. To stand out in such a crowded field is no easy task but Turbo Kid injects a powerful dose of crowd-pleasing freshness.

The highlight of this movie is how it blends several different elements from other genres (cyberpunk, superhero, schlock horror and teen movies) in just the right proportions while telling a character-driven story about finding the heroism within under even the most harsh circumstances. 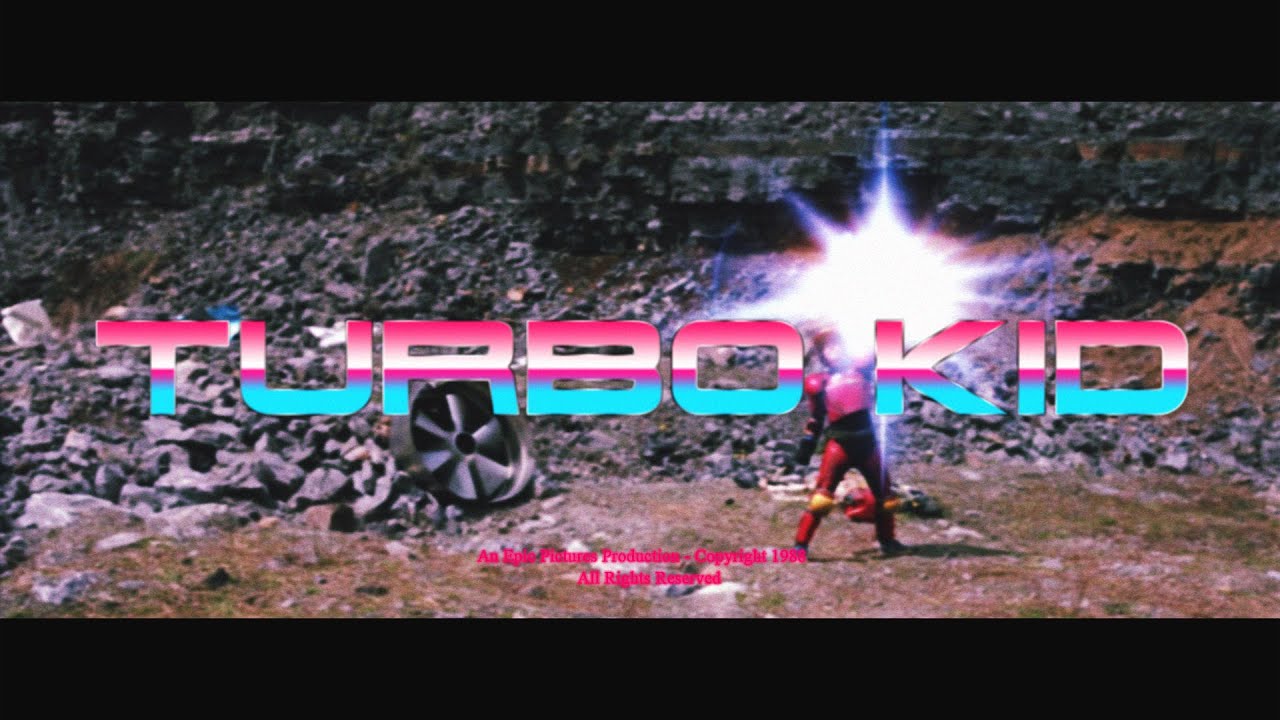 The premise involves modern civilization coming to an end during the 1980's. The exact reason is not specified but it is insignificant to to the plot that plays out several years later in the year, 1997. So, mankind never got to experience either Nirvana, Starter Jackets, OJ trying on gloves, Seinfeld, Saved By the Bell or The Spice Girls. Motor vehicles are nowhere in sight perhaps due to the planet fully being drained of fuel. Instead, bicycles are the preferred form of transportation for whomever is left to pick up the pieces after humanity's near-obliteration. As a result, this meme does NOT apply here. The exact opposite does, in fact.

The assembled acting talent elevates the movie in every way possible. Munro Chambers plays the title role of an unnamed survivor scavenging in a wasteland where water seemingly is the only resource left to fight over. To pass time, his only source of entertainment is reading whatever issues remain of his favorite comic, Turbo Rider. Chambers has a very likable down-to-earth personality that makes viewers want to root for him early on. Despite the chaotic unrest around him, he retains his optimism and hope for a better future (very much like Peter Parker, Barry Allen [AKA The Flash] and "Rudy" Ruettiger ). When destiny calls, he discovers a hidden secret that lets him become the superhero that he was always meant to be when he chooses to protect his newfound friend from a dangerous enemy. The friend in question is a bubbly mysterious girl named Apple who immediately takes a liking to our lonely hero and believes in his potential for greatness. I can easily say that Apple's actress, Laurence Leboeuf, steals every scene she is in with her warmth and wide-eyed sense of innocent wonder. If any single performer deserves an award from this movie, it is surely her. As the movie goes on, you start to see more layers uncovered behind her initially cute ditzy persona. She is the glue that holds the story together while also being far from a conventional damsel-in-distress. The friendship naturally evolves to something more in a way that John Hughes would approve for his best goose bump-friendly cinematic tales of young love in motion. This is what emotionally grounds the movie as the external bloodshed goes into overdrive.

Veteran actor Michael Ironside plays the sadistic warlord, Zeus, who has a monopoly on the local water supply. His menace is never doubted and he makes life a living hell for anyone who even slightly annoys him. Suffice to say, our two protagonists fall in the latter category. Ironside gives an exceptional A-List villain performance here that makes you fear his very presence. To do his dirty work, he has the loyal of many bloodthirsty minions. The worst of the bunch is Aaron Jeffery's Skeletron, a mute metal-masked thug who is happy to play around with his spinning saw blade on his master's command. The tension during the gruesome action scenes is tightly maintained. The filmmakers admitted that landing Ironside was an unexpected surprise after they bumped into him at a Toronto film festival. After he saw the script, he was enthusiastically on board.

In a smaller but impactful role, Aaron Jeffery plays a wise-cracking sarcastic cowboy named Frederic who no one pushes around, not even Zeus. He is clearly having fun in the role and makes it easier for the audience to enjoy the ride.

In addition to the well-written dialogue, another key selling point of the movie is the energizing musical score by Le Matos. The soundtrack is a gift to the rising synthwave genre that is putting a modern spin on the atmospheric electronic sounds of 80's New Wave in its prime (Check out the New Retro Wave and Maniac Synth channels on Youtube to take in the work of hard-working artists in this area). Here is one rocking piece from the soundtrack.

If I have to be critical of anything in this movie, it would be the excessive indulgence in on-screen cartoonish schlock violence that leaves nothing to the imagination. The filmmakers openly admit that this is their style and I know that it will appeal especially appeal to hardcore fans of Evil Dead. Last year's Kingsman got away with it too. Personally, it's just not my preference. That being said, the movie is still a wonderful experience , thanks to all of the other aspects that I have praised above. The dramatic moments hit hard and left me thinking about the characters, long after the movie was over. If Kung Fury were a parody of 80's action movies, this is a sincere appreciation of the same while pushing the sci-fi movie genre as a whole forward.

Let me know your thoughts about all things Turbo Kid-related in the comments section below. Disney's magic has done it again. The 55th addition to its broad library of animated extravaganzas is yet another…

A true underdog story just got a very, very happy ending. Deadpool destroyed the box office during the 2016…