Disney's magic has done it again.

The 55th addition to its broad library of animated extravaganzas is yet another winner.

The Mouse's recurring themes of embracing imagination and dreams is entertainingly fused with standard elements of a police procedural in a fresh package that speaks out against the concepts of hidden prejudices and stereotyping as they exist in the 21st century. Such a difficult but astounding achievement needs to be celebrated in every way possible.

Welcome to the city of Zootopia where anyone can be anything; regardless of one's species.

It all started when animator Byron Howard wanted to make an anthropomorphic animal film that was reminiscent of Disney's 1973 classic, Robin Hood. That was one flick that I watched over and over as a kid. It was responsible for introducing me to to the Sherwood Forest's most notorious anti-tax crusader long before Kevin Costner attempted a British accent.

The movie was originally conceived as an animated parody of another British icon, James Bond. The lead character was a jackrabbit named Jack Savage who worked at a MI6-like spy organization and reported to a tiny little mouse that had Judi Dench's persona; setting up an obvious size conflict. After the 1st act, Savage leaves the initial setting of a big animal city to complete his mission in the South Seas. Thus, the movie would have been called Savage Seas. The eventual plan was a franchise full of sequels called Savage City, Savage Earth, Savage Land and Savage Times. The series as a whole would have been known as the Savage Chronicles.

However, Howard and fellow animator Rich Moore (his partner in this effort) hit a roadblock after pitching this idea to the producers who were NOT fans of the Roger Moore James Bond films that the Savage Chronicles were inspired by (Side Note: I know that it's the in-thing now to drool over Daniel Craig's version of 007 but for me, Moore's films are so much fun to repeatedly watch and he played the role longer than anyone else has to date.).

The producers indicated that they liked the idea of exploring the big animal city where multiple species coexist. Thus, that became the focus of the movie, which had evolved from a spy flick to a police procedural. The city of Zootopia was born.

The initial premise involved a fast-talking fox named Nick Wilde being framed for a crime that he did not commit and being hunted by Zootopia's top cop who happened to be a bunny, Lieutenant Judy Hopps. The story was dystopian in nature since all of the predators were forced to wear devices around their necks called tame collars that inhibited any excitement or violence in order to protect the majority prey population. Nick ran a Speakeasy called Wilde Times that was a secret predator amusement park where the tame collars could be removed; allowing them to enjoy themselves and freely follow their instincts. This bold idea was canceled for being too dark, especially since Judy's character was deemed unsympathetic as a secondary protagonist for having to collar others. Despite going back to the drawing board, the characters of Nick and Judy were kept but this time in a collar-free city.

By this point, Jason Bateman and Ginnifer Goodwin(Snow White on ABC's Once Upon A Time) had already been hired to play Nick and Judy respectively. They were informed of the new premise during a voice recording session and were still enthusiastically on board. The main change was making Judy a farm-raised optimistic rookie cop who wanted to prove herself in the big city. Nick was now a slick con artist whom Judy is reluctantly forced to consult in order to solve her first case. The natural distrust between predator and prey would be mined for its comedic potential while solving a mystery. 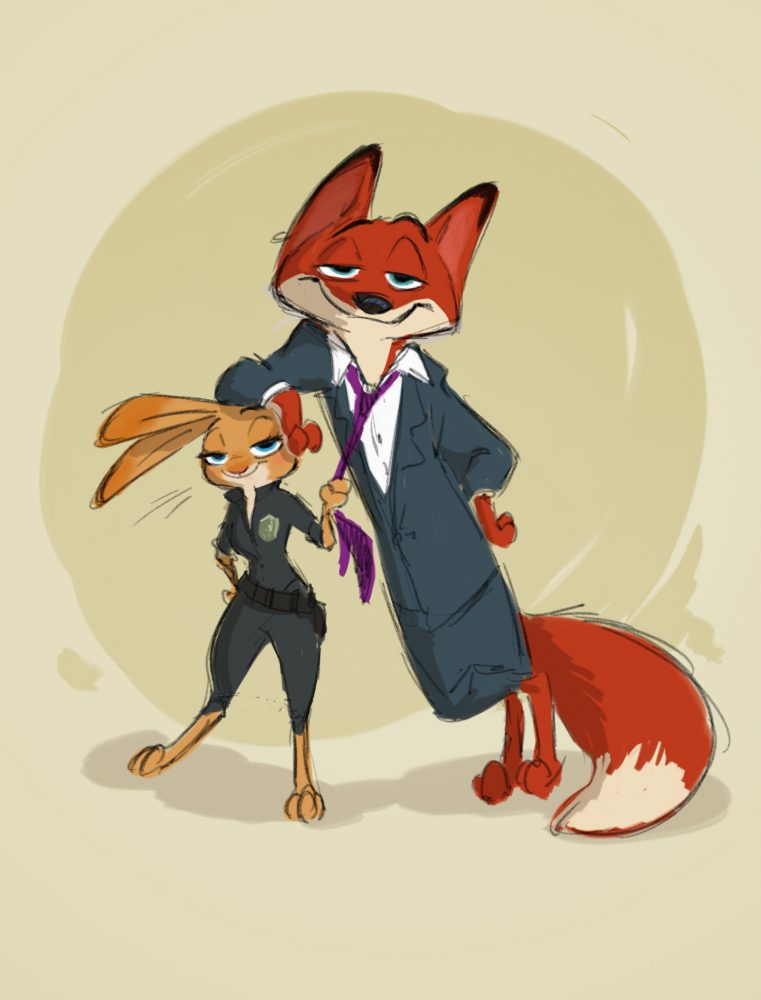 Let's now take a train to the Urban Jungle.

I have always been a harcore Disney fan for as long as I can remember. That being said, Zootopia is a masterpiece and one of the all-time best from the house that Walt built.

Even the most jaded and cynical of movie watchers will find something to appreciate here in this cop movie that pulls no punches in its underlying message of fighting hidden prejudices in a total 21st century context. Yet, Disney's trademark positivity is on full display here. Kids will be sufficiently entertained but adults will love this. The main highlight is the painstaking attention to detail that supports the vast world building. The central premise is that thousands of years earlier, mammalian predators and prey intelligently evolved to the point where they put aside their differences to peacefully coexist (in a way, somewhat Star Trek-like). The original physical site of this mass truce is now the present-day metropolis of Zootopia where multiple mammalian species (from the tallest giraffes to the tiniest mice) share space while individually losing themselves in the technology-centered lifestyle of the 21st century. The creators really wanted to show how radically different types of natural habitats can exist side by side while all retained urban elements. Rather than populating a human city with animals, they envisioned what kind of unique architecture and landscaping would result when the furry creatures themselves were in charge of design. Only a brief tour thru pictures can support this paragraph. First of all, there is Bunnyburrow, a rural town over 200 miles away where Judy's story begins.

Then, there is the central downtown area of Savanna Central.

Tundratown with its nods to Russian Byzantine architecture.

Little Rodentia is inspired by Greenwich Village and it is where the tiny creatures reside. 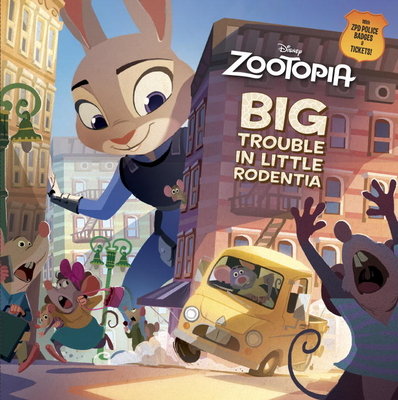 Finally, there is the Rainforest District where branches and walkways are made only for animals with a good sense of balance (nope, humans don't qualify).

All of these exotic settings organically yield to the main underdog story. Judy Hopps finally achieves her dream of being a big city cop. Unfortunately, as the first bunny police officer, she is not taken seriously by the majority of her more physically imposing fellow law enforcement personnel (including her tough and close-minded buffalo boss, Chief Bogo). Her own parents think that she is crazy and should return to the family's carrot farming business. On the plus side, the mayor's office is using her as a public relations prop in order to secure more votes. The fun really starts when a street smart con artist fox named Nick Wilde ends up being the only lead in her first case. The witty banter-fueled investigation takes them through every neighborhood of Zootopia where they slowly uncover a shocking conspiracy that threatens the city's future. What elevates the movie to a new classic is how it dwells on how harmful hidden prejudices and stereotyping can be to society while never deviating from Disney's magical entertainment formula for animation. Both Judy and Nick distrust each other even though it has been over thousands of years since the former's species was hunted by the latter's. What I like the most is how bigotry is shown to be a two-way street instead of making only one type of species guilty. Individuals should NOT be judged for the actions of their ancestors. All of the tension between different species exists underneath the surface instead of overtly (just like real-life tension between members of different races and religions in even the most inclusive of places). As bad as Judy has it, Nick faces discrimination from everyone (including other predators) for being a fox. His tragic backstory is incredibly moving and grounds the narrative even further. Zootopia is given life by tackling modern political realities head on. 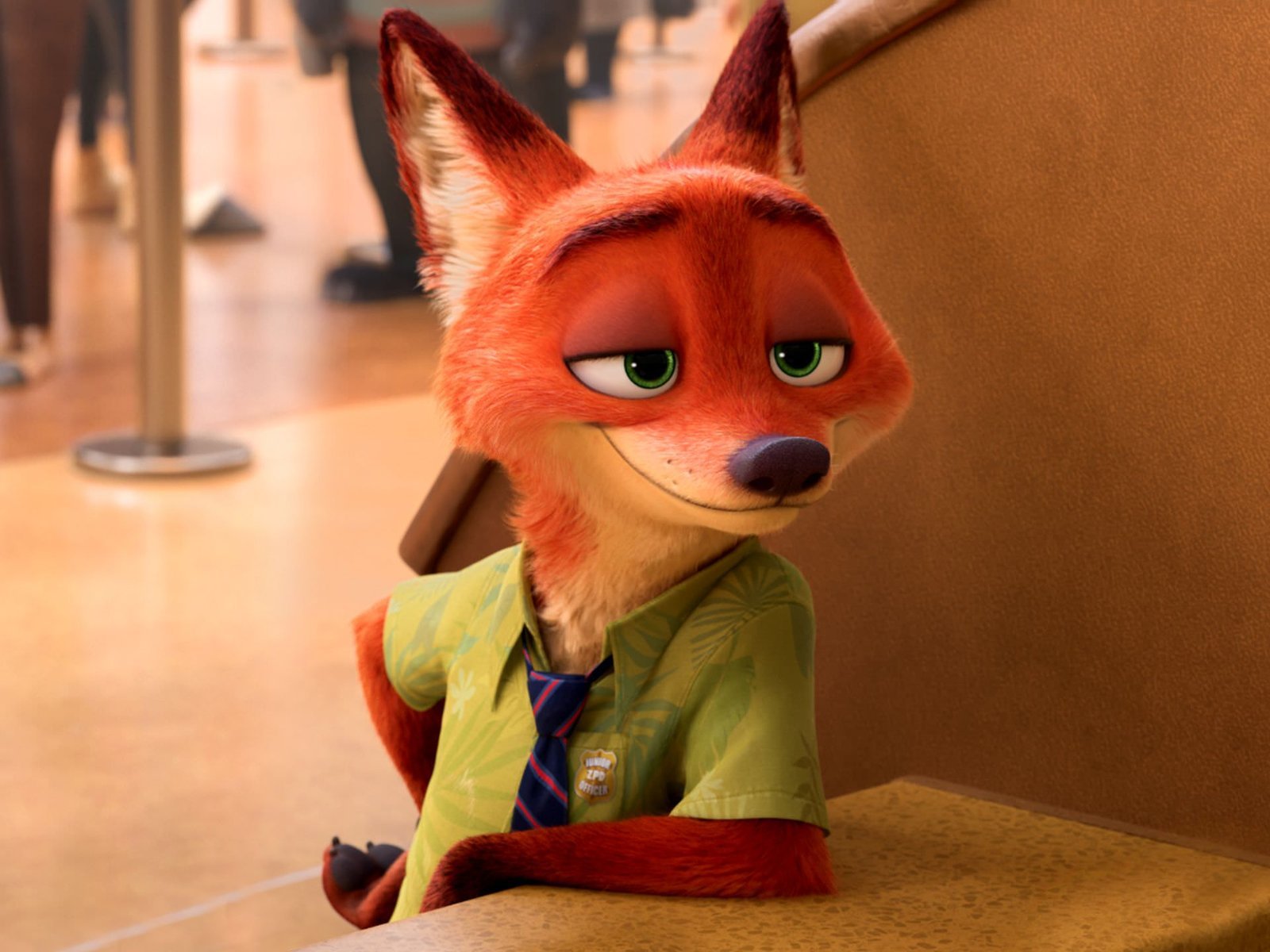 The voice acting is beyond exceptional. Again, Jason Bateman and Ginnifer Goodwin could not have given more outstanding performances. Idris Elba (Chief Bogo), J.K. Simmons (Mayor Lionheart), Jenny Slate (Deputy Mayor Dawn Bellweather), Tommy Chong (hippie yak, Yax) and Maurice LaMarche (fearsome crime boss, Mr. Big) are just a few more examples in this loaded ensemble cast. Raymond S. Persi and Kristen Bell deserve special mentions as the sloths who keep the DMV running. Speaking of which, this scene alone should convince most people to give this movie a chance (NOT really a spoiler since it is the 2nd trailer).

Even Shakira steals a few scenes as pop star Gazelle, especially during a key moment when the story's drama ramps up. Her song is catchy and fits the movie very well.

Thanks to the current leadership of John Lasseter (also the founder of Pixar), Disney Animation continues to be on a hot streak (Tangled, Wreck It Ralph, Frozen, Big Hero 6). Zootopia is just the latest winner. As opposed to being crushed, the movie is skyrocketed beyond the stratosphere by the weight of its bold ambition. As Judy slowly learns, life is complicated. Tolerance and acceptance are worthy ideals. Yet, even in the most progressive of democracies, the truth is that they're continuous processes where there is always room for improvement. Zootopia drives home this topical message in the form of a buddy cop flick while being an immersive character-driven Disney animated adventure. Highly recommending this touching cinematic journey would be an understatement!!!!!! 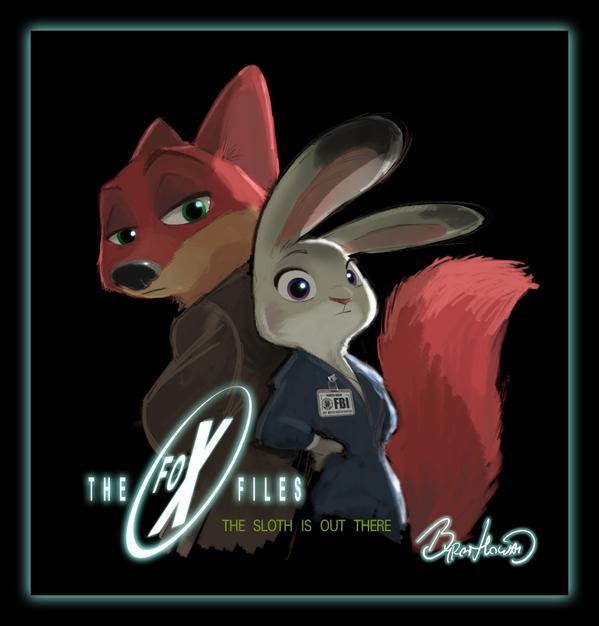 Ladies and Gentleman, welcome to the one and only basketball tournament that will push the total amount of adrenaline…

A treasure awaits to be added to your Netflix queue. Turbo Kid joined the lineup for the digital entertainment…